A plea and challenge to Jesuits: Embrace authentic poverty 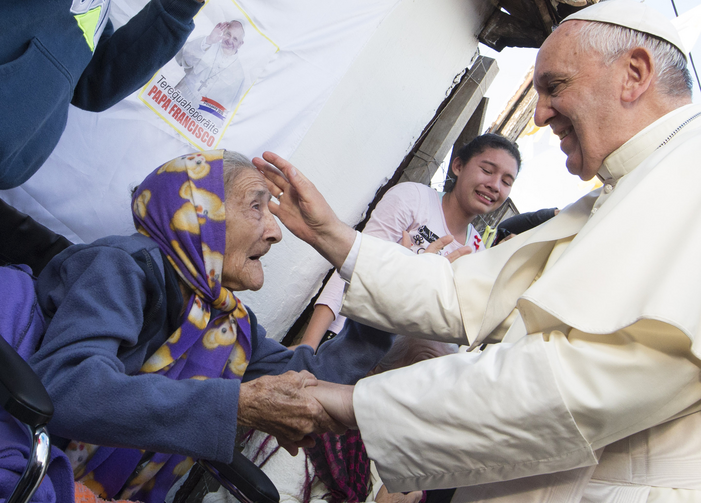 On Feb. 19, the Society of Jesus sent out to its members a letter detailing four “universal apostolic preferences,” approved by Pope Francis, that are to guide the life and work of the Jesuits over the next 10 years. They center around Ignatian spirituality, poverty, youth and the environment. The second preference, walking with the poor, provides an opportunity for the Jesuits to change their way of life and make their mission more credible.

St. Ignatius explains the 30-day retreat he calls Spiritual Exercises as a “way of preparing and disposing the soul to rid itself of all inordinate attachments, and, after their removal, of seeking and finding the will of God in the disposition of our life for the salvation of our soul.” Anything that can help people find the will of God is of universal and permanent value for all believers.

The apostolic preference of “walk[ing] with the poor, the outcasts of the world, those whose dignity has been violated, in a mission of reconciliation and justice” follows from two key meditations in the Spiritual Exercises. But the meaning of that preference could be missed. It is not about directly working for the poor, although it certainly includes that. Essentially, it is living like the poor.

The second preference, walking with the poor, provides an opportunity for the Jesuits to change their way of life and make their mission more credible.

Because Jesuit life is based on the Exercises, my assumption is that this preference is grounded, first, on the “Kingdom meditation,” in which Jesus invites us to “labor with” him to establish the reign of God on earth. But the response Ignatius proposes makes clear that the invitation is more to a way of life than to a particular kind of work: “Eternal Lord of all things…this is the offering of myself which I make…to imitate you in bearing all wrongs and all abuse and poverty, both actual and spiritual, should your most holy majesty choose to admit me to such a state and way of life” (emphasis added).

This is reinforced in the meditation on the “Two Standards,” in which Ignatius identifies the respective strategies of the devil and of Jesus. The devil tempts people to two things that are not in and of themselves sinful—to seek wealth and prestige—but nevertheless set people up for the sin of all sins, pride.

The strategy of Jesus to combat pride is to urge people to embrace two things that in and of themselves are not good but that together lead to one great good. The first, writes Ignatius, is “poverty as opposed to affluence”; the second is “insults or contempt as opposed to the prestige of this world.” These prepare the ground for us to receive the third virtue: “humility as opposed to pride.” This strategic insight may be St. Ignatius’ greatest contribution to theology.

If the clergy follows Pope Francis’ example, the public image of the church might be transformed from one of wealth and prestige to one of poverty and humility.

We see a sterling example of humility in Pope Francis. One of his first notable acts when elected was to move out of the papal palace. The first Jesuit pope refused the honorific titles and trappings of papal protocol and made himself available to the poor. Francis has changed the entire image of the papacy and our expectation of how a pope should act. If the hierarchy and clergy follow his example, the public image of the entire church might be transformed from its image of wealth and prestige to one of poverty and humility.

I was a Jesuit for 32 years. I left because I felt called to help form a new religious order (which did not work out). Though I was critical of the way we Jesuits were living out our vow of poverty and made my criticism known in talks and in the Jesuit publication “Studies in the Spirituality of Jesuits,” my issues with poverty were not the reason I left. I was satisfied I could live personal poverty, even if communal poverty was not all that it should be. But since St. Ignatius calls poverty the “outer bulwark” of religious life, I believed then and still do that the Jesuits needed to defend it as a first priority.

It is to this that the Jesuits have dedicated themselves: to “walk with the poor and outcasts of the world” by living like them in “bearing all wrongs and all abuse and poverty,” according to the Spiritual Exercises. And in this way to embrace the “mission of reconciliation and justice.”

It is to this that the Jesuits have dedicated themselves: to “walk with the poor and outcasts of the world.”

To “walk with” is to accompany. It is to do for the poor what God did for the human race by becoming one of us. Jesus validated humanity by becoming Emmanuel, “God with us.” Henceforth, nothing human can be despised. By becoming poor with the poor, the Jesuits will validate the “outcasts of the world, those whose dignity has been violated.”

To paraphrase Philippians 2:5 and Hebrews 4:15, to “walk with the poor” is to let the same mind be in us that was in Christ Jesus, who, though he was rich, emptied himself, being born in poverty. It is to give to the poor ministers able to sympathize with what they experience, being in every respect as they are, except in what is dehumanizing or detrimental to the greater good.

Jesuit poverty should be as dramatically visible and shocking as the incarnation of Jesus. This statement only repeats Pope Paul VI, who defined Christian witness as a lifestyle that “stirs up irresistible questions in the hearts of those who see how they live: Why are they like this? Why do they live in this way?” Jesuits should live in a way that raises eyebrows. Anybody who sees a Jesuit on the street should be able to identify him as one who is at home with “the poor and outcasts of the world.”

Jesuit poverty should be as dramatically visible and shocking as the incarnation of Jesus.

Many Jesuit schools educate primarily the wealthy. True, these high schools and colleges work hard to enroll as many poor students as possible. Nevertheless, in working with the sons and daughters of the upper classes, one can easily slip into the trappings of the upper classes. Should the Society take its men out of these schools or accept the challenge of living a poor lifestyle within them?

Living a poor lifestyle is a communal challenge. Rick Thomas, S.J., who worked with the poor in El Paso, Tex., told me of his frustration when, at a Jesuit meeting in Mobile Ala., he was served steak. “The people I work with get a piece of meat like this maybe once a year,” Father Thomas said. “I don’t want to eat steak. But it’s all there is.” Not uncommon is the story of a college faculty member who was regularly invited to dinner at a Jesuit community and told one of his hosts: “I love dinner with the Jesuits. I can’t afford to eat like that myself.”

So how does one live poverty when it is not a communal commitment? That is the gauntlet the Jesuits have just taken up. Their second apostolic preference, as I understand it, is to make poverty real.

Making poverty real can be done, beginning with individual choices. Though surrounded by Vatican affluence, Pope Francis lives simply. In Father Thomas’s biography, the photo of his room is austere. Unlike most Franciscans, Jesuits don’t wear a habit, but nothing would keep them from wearing inexpensive clothes from the Goodwill store.

Making poverty real can be done, beginning with individual choices.

Do these examples sound ridiculous? Is this unrealistic? Here is where the call to discernment comes in. When he was a missionary in Japan in the 1500s, St. Francis Xavier discovered he could only win over the Japanese for Christianity by converting the ruling class. To do this, he and his companions presented themselves as dignitaries. It bore fruit by gaining them access to scholars and other religious and civil leaders they would not have encountered otherwise.

But each situation calls for a new discernment. The benefits and witness of authentic poverty in our time and place and culture are too predictable to be abandoned lightly. And discernment demands detachment. A few years ago, a Jesuit province in the United States decided it had to close one of its high schools because of the low number of Jesuits available for that ministry. It wasn’t clear, however, which school should be closed. The faculty of each school in the province was asked to engage in communal discernment to determine whether their school was the one that should be closed. A Jesuit priest said that in prayer he came to believe that the school where he lived should remain open.

But at breakfast the next morning, this priest reported a change of heart. He said to his fellow Jesuits: “It occurred to me when I was shaving this morning that this is the only school we staff where I would have a private bathroom. I think that had a lot to do with my discernment!”

The Jesuits will only be able to bring about significant changes in the Society of Jesus—and in the world—through a communal conversion to overcome individualism and develop a visible lifestyle that gives concrete credibility to their decision to “walk with the poor.”

This is the challenge the Jesuits have embraced. That they will be equal to it is my prayer for them and my plea.