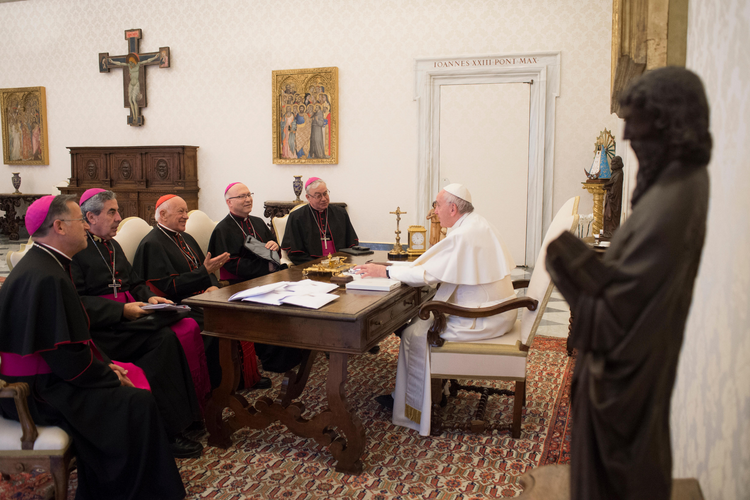 Pope Francis meets with the leadership of the Chilean bishops’ conference at the Vatican on Jan. 14 to talk about the sex abuse crisis affecting the church in Chile. (CNS photo/Vatican Media)

The Vatican has spelled out the purpose and goals of the summit on the protection of minors, to be held Feb. 21 to 24, which will bring together the presidents of bishops’ conferences from around the Catholic world, senior officials of the Roman Curia, representatives of the international unions of major religious superiors (both men and women) and a number of survivors of abuse. It also sought to lower expectations for that event.

“The goal is that all of the bishops clearly understand what they need to do to prevent and combat the worldwide problem of the sexual abuse of minors,” Alessandro Gisotti, the interim director of the Holy See press office, told journalists at a press briefing at the Vatican today.

He said, “It is fundamental for the Holy Father that when the bishops who will come to Rome have returned to their countries and their dioceses that they understand the laws to be applied and that they take the necessary steps to prevent abuse, to care for the victims and to make sure that no case is covered up or buried.”

He told reporters, “Pope Francis knows that a global problem can only be resolved with a global response.”

Reading from a prepared text, Mr. Gisotti explained that the pope wants the February summit “to be an assembly of pastors, not an academic conference—a meeting characterized by prayer and discernment, a catechetical and working gathering.”

“Pope Francis knows that a global problem can only be resolved with a global response.”

In a separate communique today, reporting on the meeting on Jan. 10 of the preparatory committee for the February event, the Vatican said the summit includes “plenary sessions, working groups, moments of common prayer with listening to testimonies [from survivors], a penitential liturgy and a concluding Eucharistic celebration.”

It said Pope Francis “has assured his presence at the entire meeting,” adding that the pope has asked Federico Lombardi, S.J., the former director of the Holy See press office, “to moderate the plenary sessions.”

The summit is going to be a major media event, perhaps the biggest one since the 2013 conclave, and has given rise to high expectations. Mr. Gisotti sought to temper these. “It is important to emphasize that the church is not at the beginning of the fight against abuse,” he said. The summit “is a stage along the painful journey that the church has unceasingly and decisively undertaken for over 15 years,” he explained.

His remarks echoed the observations of Andrea Tornielli, the new editorial director for the Vatican Dicastery for Communication, in an editorial on Jan. 10. “There are excessive media expectations in view of the upcoming meeting called by Pope Francis on the subject of protecting minors and vulnerable adults, as if it were an event halfway between a council and a conclave,” Mr. Tornielli wrote. “These expectations risk overshadowing the ecclesial significance of a meeting among Pastors, among Presidents of Episcopal Conferences of the whole world who, together with the Successor of Peter, will reflect on the theme of abuse,” he added.

Mr. Tornielli said: “What needs to be emphasized, above all, is the universality that is typical of the Catholic Church and that reverberates in the meeting…. The presence of bishops from all over the world, called together for the first time to address this painful plague which has been, and is, a source of enormous suffering for victims and of counter-witness to the Gospel, will help to increase everyone’s awareness of the seriousness of the crisis.”

He added, “The phenomenon of the abuse of minors, the horrific experiences of the victims, the procedures to be applied in the face of accusations and the indications to ensure a safe environment for children and young people, will thus be examined from a perspective that is not solely European or American.”

Mr.Tornielli said that the purpose of the meeting is “to ensure that everyone taking part in it can return to their own country being absolutely clear about what must (and must not) be done with regard to addressing these cases. Namely, what steps must be taken to protect the victims, with respect for the truth and the people involved, in order to ensure that no more cases are stonewalled or covered up.

“The rules on how to respond have been established and strengthened by the will of recent popes,” he wrote, but “norms, laws, codes and procedures that are increasingly perfected and precise are not enough; they can never be enough if the mentality and the hearts of those who are called to apply them do not change.”

For this reason, he said, Pope Francis “continues to point out the path of conversion.”

He said it was important that each of the summit’s participants “listen to the testimonies of surviving victims” and follow the example of Benedict XVI and Pope Francis in meeting victims, listening to them weeping with them and sharing their suffering.

He recalled that Pope Francis, in his address to the diplomatic corps, said the February meeting will serve as an attempt “to make past mistakes opportunities for eliminating” the scourge of abuse, “not only from the body of the church but also from that of society.”