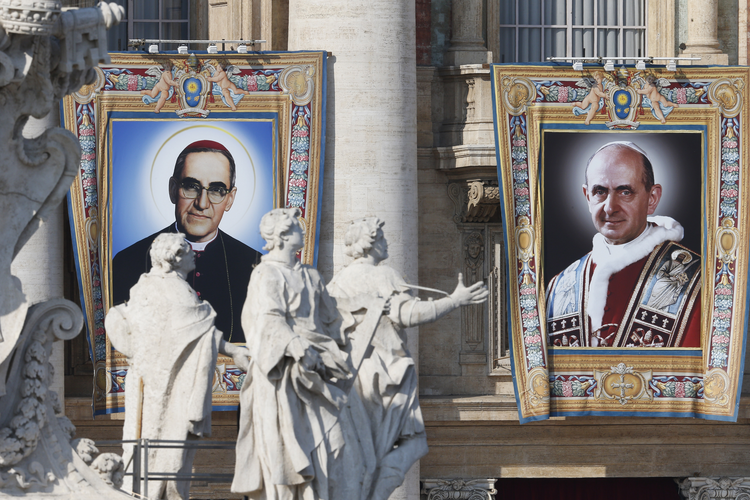 The banners of new saints Oscar Romero and Paul VI hang from the facade of St. Peter’s Basilica as Pope Francis celebrates the canonization Mass for seven new saints in St. Peter’s Square at the Vatican Oct. 14. \(CNS photo/Paul Haring)

Seventy thousand pilgrims from all continents, including thousands from Latin America, applauded enthusiastically this morning in St. Peter’s Square when Pope Francis declared Paul VI, the reforming pope of the Second Vatican Council, Óscar Romero, the martyr archbishop of El Salvador and advocate of the poor, and five others—including two women religious, two priests and a 19-year-old layman—saints of the universal church.

Francis, the first Latin American pope, identifies strongly with both Paul VI and Archbishop Óscar Arnulfo Romero. He sees Paul VI (1897-1978) as the pope who had a broad vision of the church that was inspired by Vatican II, and Archbishop Romero (1917-80) as one who incarnated that vision in his total commitment to the poor. Francis sees himself as continuing the reforming work of the Second Vatican Council that Paul VI first began and as following in the footsteps of Archbishop Romero’s commitment and dedication to the poor. He made this clear at Mass today by wearing the blood-stained cincture that Archbishop Romero was wearing when he was assassinated “out of hatred for the faith” while celebrating Mass on March 24, 1980 and also by wearing a pallium, carrying the crozier and using a chalice belonging to Paul VI.

He referred to both saints in his homily when he commented on the Gospel story told by St. Mark the Evangelist that was sung in Latin and Greek at the Mass. That story recounted how a rich young man ran up to Jesus and asked what he must do “to inherit eternal life,” since he had observed all the commandments. Francis noted that the young man asked what he must “do”; in other words, he wanted “a good to be obtained, by his own efforts.” But, the pope recalled, “Jesus changes the perspective: from commandments observed in order to obtain a reward, to a free and total love. That man was speaking in terms of supply and demand, Jesus proposes to him a story of love” and calls on him to “sell what you have and give to the poor.”

Pope Francis told the crowd “the Lord does not discuss theories of poverty and wealth but goes directly to life. He asks you to leave behind what weighs down your heart, to empty yourself of goods in order to make room for him, the only good. We cannot truly follow Jesus when we are laden down with things. Because if our hearts are crowded with goods, there will not be room for the Lord, who will become just one thing among the others.”

This is the homily Óscar Romero was delivering when he was killed.
Óscar Romero

Then, looking at the 120 cardinals, 500 bishops and 3,000 priests that were concelebrating with him, the presidents of El Salvador, Chile, Italy and Panama, who were seated on the steps of the basilica alongside the former queen of Spain, Sofia, and delegations from many countries as well as the former Archbishop of Canterbury, Rowan Williams, and the Nobel peace laureate Adolfo Perez Esquivel, the pope told them: “Jesus is radical. He gives all and he asks all: He gives a total love and asks for an undivided heart.”

He made clear that Paul VI and Archbishop Romero responded to the radical call of Jesus with “an undivided heart,” each in their own way: one as pope and leader of the Catholic world and one as an archbishop serving the poor and oppressed in the midst of a civil war in El Salvador.

“Paul VI spent his life for Christ’s Gospel, crossing new boundaries and becoming its witness in proclamation and in dialogue, a prophet of a church turned outward, looking to those far away and taking care of the poor,” Pope Francis said.

Francis sees himself as continuing the reforming work of the Second Vatican Council that Paul VI first began and as following in the footsteps of Archbishop Romero’s commitment and dedication to the poor.

His words appeared to refer to the missionary outreach of Paul VI, who served as pope from 1963 to 1978. As pope, he visited the Holy Land in 1964 where, overcoming centuries of division, he embraced the Orthodox Patriarch of Constantinople, Athenagoras I, in Jerusalem. He also traveled to India and the Lebanon that same year to reach out to the poor, and later to Geneva. He went to the United Nations in New York in 1965 and appealed to the governments of the world, “Never again war!” He visited Fatima in 1967 and Turkey that same year to meet the ecumenical patriarch and reach out the Muslims. He went to Colombia in 1968 to encourage the bishops of Latin America and the Caribbean implement the teachings of the Second Vatican Council through the preferential option for the poor; and he went to Iran, Pakistan, the Philippines, the Samoan Islands, Australia, Indonesia, Hong Kong and Sri Lanka in 1970. He wrote famous encyclicals, including his first “Ecclesiam Suam” (1964), which highlights the importance of dialogue, and “Populorum Progressio” (1967) on “the development of peoples.”

In his homily, Francis recalled that “even in the midst of tiredness and misunderstanding, Paul VI bore witness in a passionate way to the beauty and the joy of following Christ totally.” Here, he appeared to be referring, among other things, to the opposition Paul VI encountered both from traditionalist sectors in the church over his Vatican II-inspired reform of the liturgy and his imposing age limits on bishops and cardinals as well as the opposition that came from progressive sectors over the encyclical “Humanae Vitae” (1968), and from right-wing political and economic sectors in the world.

Francis told his worldwide audience, and the thousands who had come from Brescia and Milan where Giovanni Battista Montini, the future pope, was born and served as archbishop, “Today, Paul VI still urges us, together with the Council whose wise helmsman he was, to live our common vocation: the universal call to holiness. Not to half measures but to holiness.”

He said, “It is wonderful that together with him and the other new saints today, there is Archbishop Romero, who left the security of the world, even his own safety, in order to give his life according to the Gospel, close to the poor and to his people, with a heart drawn to Jesus and his brothers and sisters.”

His words about Romero were surprisingly few but they went to the essential and were cheered on by the 8,000 Salvadoran pilgrims present, many of whom waved their national flag.

Archbishop Romero’s faithful friend and collaborator, Gregorio Rosa Chávez, the humble auxiliary bishop of San Salvador whom Francis made cardinal in 2017, concelebrated the Mass with Francis along with the archbishop of that same archdiocese.

“Paul VI spent his life for Christ’s Gospel, crossing new boundaries and becoming its witness in proclamation and in dialogue, a prophet of a church turned outward, looking to those far away and taking care of the poor,” Pope Francis said.

Pope Francis will meet the Salvadoran bishops tomorrow and is expected to announce that when he goes to the World Youth Day in Panama in January 2019, he will also visit El Salvador and pray at the tomb of Saint Óscar Romero.

In his homily, Pope Francis briefly mentioned the other five new saints who also responded “with undivided hearts” to the radical call of Jesus. Two were Italian priests:Francesco Spinelli (1853-1913), who founded a religious order of women devoted to the adoration of the Blessed Sacrament, and Vincenzo Romano (1751-1831), a diocesan priest. Another two were women religious: the German-born, Maria Caterina Kasper (1820-98), and the Spanish born Nazaria Ignazia of St. Teresa of Jesus (1889-1943), who spent most of her life in Bolivia but died in Argentina. The Bolivians consider her their country’s first saint. The seventh saint was a 19-year-old Italian young man, Nunzio Sulprizio (1817-36). He was a blacksmith’s apprentice who suffered ill health but was renowned for his holiness. Pope Francis was delighted that he could canonize him during the synod on young people, many of whom were present at the ceremony today.

At the end of Mass, Pope Francis, who is in good health and clearly full of joy, greeted the cardinals and distinguished visitors before driving among the enthusiastic crowd. It was a historic day in the life of the church and one that will be remembered for decades to come, especially in Latin America.